The economics of identity systems

Economists have a unique way of observing and evaluating human activities based on produced economic surplus. Although excessive reliance on this viewpoint can prove myopic and amoral, it is nevertheless a useful tool for assessing the underlying reality of things.

In this article we focus on a detailed understanding of the economic realities of identity systems, in terms of their contribution to value creation, their usage of specific processes, artifacts, and tools, and their relation to the most common economic activities. This will help us understand how and why such systems have become ubiquitous, as well as provide us with a framework to approach future-facing identity system solutions.

We start by enumerating common categories of activities and usage patterns across different identity systems. Organizing categories of activities by verbs, groups, and stages, may seem like an arbitrary exercise, but it goes to the root of why and how such economic activities have been sustainably occurring in human history, and have been consistently creating surplus. It also helps explain investments in large-scale infrastructure systems such as national identity systems. Additionally, going through this exercise produces the key insight that fundamental improvements to these systems can have the potential to disrupt and improve human activities at scale.

One can generally organize human activities into a hierarchic structure that points to value creation at its apex (see figure below). The other 3 stages or layers to this hierarchy, namely: establishment, preparation, and action, consist of so called supporting activities. The Security administration category of activities can span all these stages, while other categories of supporting activities such as identification, connection, interaction and transaction generally fit within a specific stage.

A significant subgroup of support activities fall within the identity domain meaning they are facilitated by large scale identity systems such as state drivers license programs. Such systems are always accompanied by a set of artifacts such as identification cards or other documents, meant to be used by everyday people as common tools.

In one section, we deep-dive into the most commonly performed activity verbs, and the most commonly used tools, as well as their relationships to the activity categories we defined above. This detailed analysis is performed in both contexts of present-day digital systems, and legacy systems pre-dating them. This comparison demonstrates how both generations of these systems and tools are ultimately enabling the same categories of supporting activities following similar patterns. All of this can inform future efforts to define next-generation self-sovereign identity systems, given that the same patterns will likely hold true there.

Looking through the economic lens, we can generally organize human activities as hierarchic structures, ultimately meant to support transactions with positive value creation. This can result in the oversimplified yet helpful notion that all sustainable forms of activity directly or indirectly contribute to value creation.

At a high level, transactions generally go through the following stages:

Activities supporting transactions can generally be categorized into the following groups:

There are various examples of large-scale systems created by communities, nations, companies and other large actors, that help reduce costs of economic activity for large numbers of people an organization, in many of the above categories. The public internet is just one notable example of an information system, others are the different types of infrastructure created by national governments, such as highway, telephone and courts infrastructure.

Much of the activities related to identity systems, or general security efforts that lead up to a final transaction, exist to mitigate or prevent undesirable outcomes in favor of a final and productive outcome. Think reducing the chances of fraud, or outright theft.

Identity systems are commonly used by larger groups of people to optimize social interactions between people and organization. These systems function by securely representing the identities of people, organizations and things, as well as by allowing people to more easily identify, verify, connect, access, and interact by reducing the cost of these activities at scale.

For example, it is common for businesses to use driver’s licenses to identify people and verify their personal information such as name, age, address, etc. Thus, the identity system created by the department of motor vehicles, and supported by the issuance of driver’s licenses, provides the tools for people and businesses to reduce the supporting costs of transactions.

In reality there are multiple layers of these identity systems (such as naming, birth certificates, licenses, passports, employee identification, social networks, etc) working together to create a hybrid identity system, which all people and organizations benefit from. The sheer scale of this hybrid system’s usage and value mean that any improvements in efficiency, has the potential to disrupt current economic activities, as a result of significant reduction of costs. One opportunity that stands out here is the potential to improve efficiency by the combination of digitization and reducing fragmentation.

We can dive a bit deeper into specific examples of supporting activities and the systems and tools that power them. 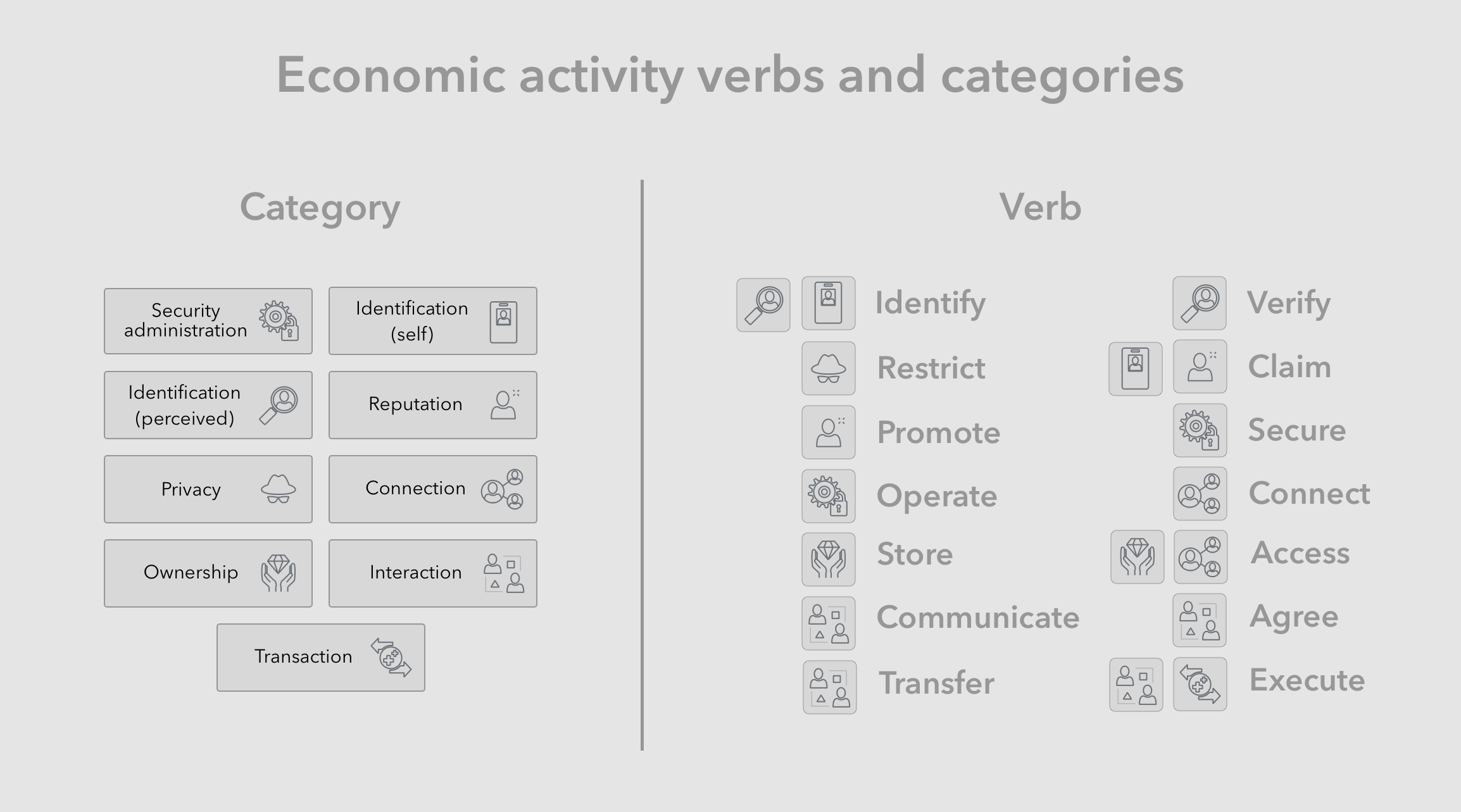 Following are the common supporting activity verbs denoted by their [categories] in brackets:

Trends of digital transformation have already resulted in significant changes in many parts of the economic landscape, including in the identity sub-systems we use everyday, even though legacy systems also remain heavily in use. Thus, it is helpful to organize identity system and artifacts into legacy and digital, and observe their form and function, in search of common patterns, and insights and to shape our approach to future-facing solutions.

In the past few centuries, especially following the industrial revolution, human societies have developed and converged on a few common processes, infrastructure systems and tools, related to the identity domain and for the purpose of supporting economic activity. Examples include the systems and norms around the use of identity documentation, such as identification cards and passports. Examples also include legal and financial systems and instruments, such as money, checks and contracts.

Some of the above-mentioned processes and systems have been disrupted or evolved since start of the digital information revolution, however in this section we focus on the systems and tools that remain unchanged by digital technology, thus use of the term “legacy”. We also primarily focus on the artifacts as representative symbols, as opposed to, and in place of their backing systems and processes. 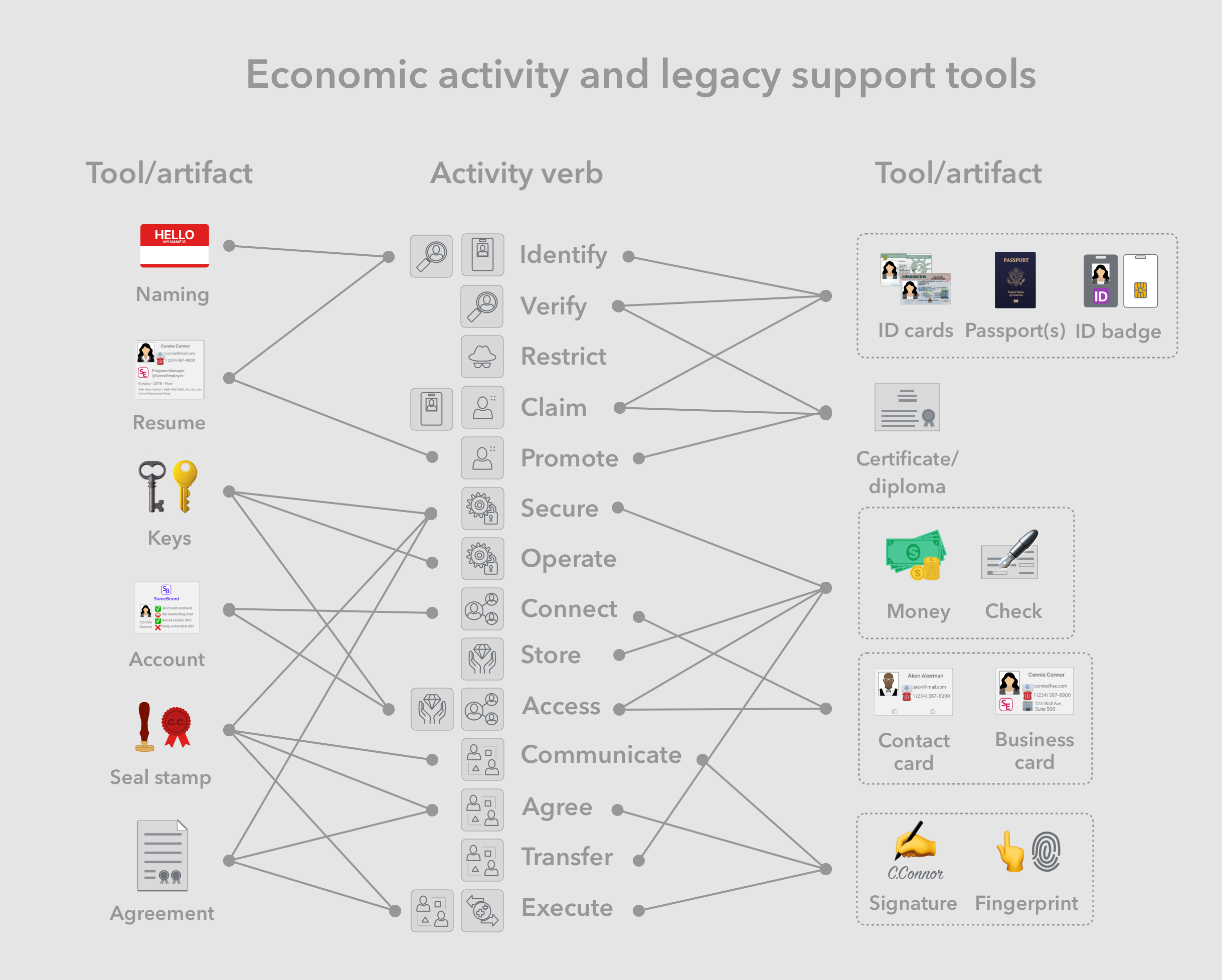 As mentioned, some of the processes and systems in use since the industrial revolution, have been disrupted or have evolved since start of the digital information revolution by taking advantage of digital technology and its efficiencies.

Sometimes these improved systems are digital equivalents of their legacy counterparts, as with the example of digitized voice communication over the same phone infrastructure. At other times these systems are rebuilt on a completely new digital foundation, and present completely new opportunities, such as with the example of the internet and electronic mail. Below, we focus on particular artifacts, as opposed to, and in place of their backing systems and processes. 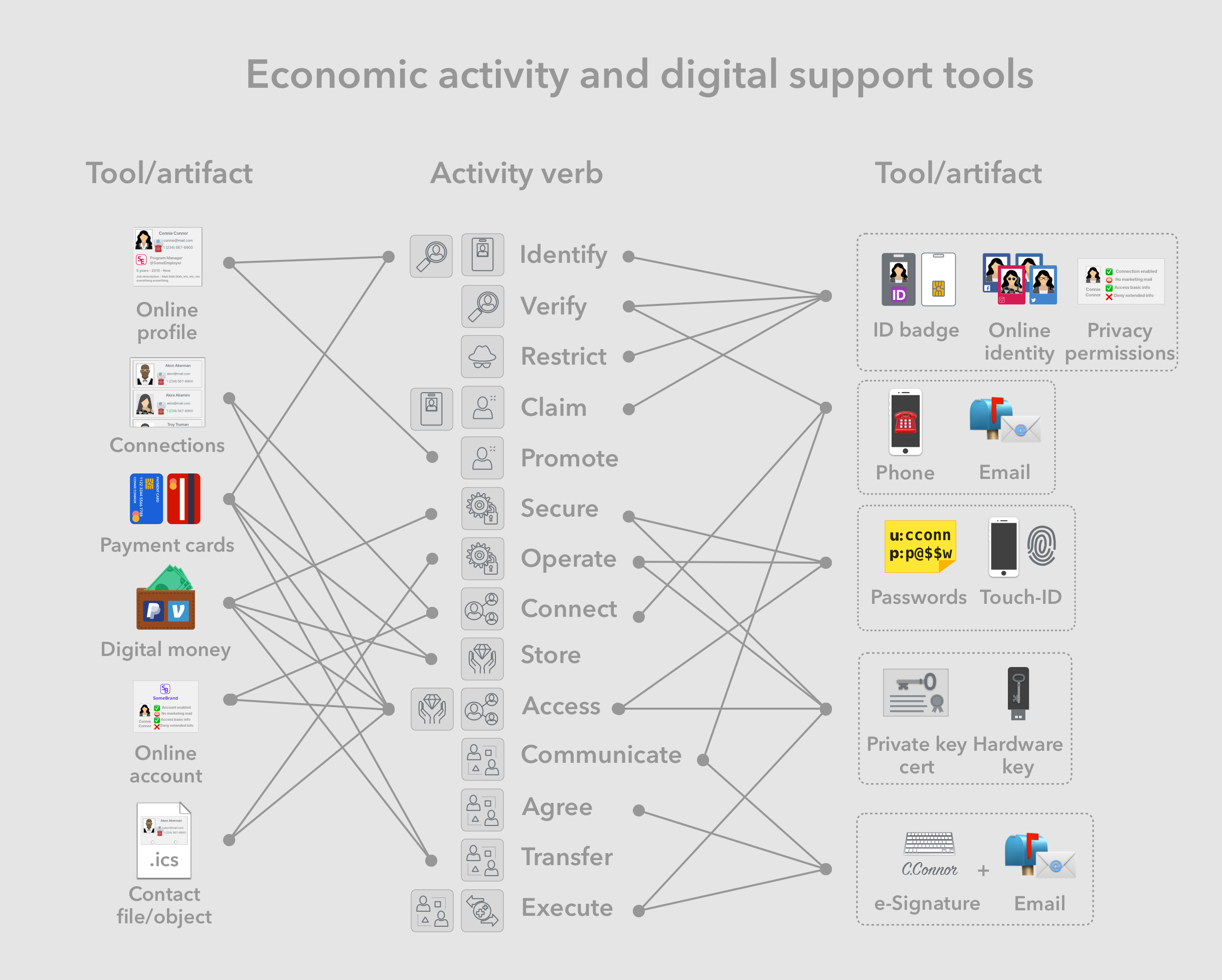 Although it is extremely difficult to aggregate and measure the macro value of above-mentioned economic activities on holistically, we can use data from existing sub-markets, especially in the enterprise segment, to get an idea for the magnitude of the greater market for identity systems.

Generally most activities fall within the following markets: 1. Consumer 2. Enterprise 3. Government and institutions. Much of the activity in the Consumer segment is difficult to measure as most products are not priced to reflect real financial values, instead these products are monetized through other means such as advertising, or up-sell to other more valuable services. The government (public sector) segment is somewhat measurable based on some transparency in budgets, but it still does not reflect the more accurate market driven pricing. However enterprise markets are generally more measurable due to a vibrant market ecosystem around offerings.

Let us focus on the enterprise segment, and dig deeper into a few sub-segments for market size estimates. The enterprise identity market is generally divided up into somewhat arbitrary sub-segments such as: Identity access management (IAM), Identity verification, Enterprise authentication (including Multi-factor auth. and Single sign-on (SSO)) as well as a few other related and niche categories such as Device management, Password management, Digital transaction management, Reputation and creditworthiness.

Market size projections exist for at least a few of these categories, and here we consider conservative estimates by looking at minimums of multiple projections. These include: Identity verification estimated to grow to over $15B by 2025, Enterprise authentication to grow to over $17B by 2025, and IAM estimated to grow to over $20B by 2025. There are many activities and sub-segments that are not considered as part of the above markets and estimates, such as the development and operational overhead that will still be incurred by enterprises with their existing custom solutions.

For the consumer segment, we have a few other reference data points that may help measure economic activity. As of 2017 a conservative number for the number of logins per year occurring through the social media identity providers such as Facebook and Google, is over 300B. Other sub-segments that are related but not considered include: Social networking and communication, reputation and creditworthiness, content on social networks, identification documents and verification.

There are market projections from a growing sub-segment of the consumer market, namely password managers, despite the market being largely commoditized by device platform providers such as Google and Apple. Nevertheless the sub-segment is estimated to grow to as much as $2B by 2025. Overall we believe it conservative to estimate the macro identity systems market to be over $200B in real economic value size, however given the difficulties in including and measuring much of the economic activity, we believe it could be easily something over $0.5T.

The ongoing trends of digital transformation have not changed the existential need for identity systems and tools that support economic activity. Instead, they have primary contributed to the new digital form of these systems and tools, as well as improvements to their efficiency.

Given their ubiquitous presence across the economy, improvements in the efficiency of identity systems en masse, has the potential to disrupt a large portion of current human economic activity, as a result of significant reductions in costs. Accordingly, one macro opportunity that stands out is the potential to improve economic efficiency by a combination of digitization and fragmentation reduction.