Lack of great user experiences is often raised as one of decentralized identity’s (and public blockchain’s) missing ingredients for ubiquitous adoption. However to arrive at usable experiences across the industry, we first need to reach consensus around basic user personas and mental models, then design and build interoperable system accordingly.

In “the internet’s missing identity layer” we took a stab at an acceptable set of personas and solution criteria for this self described identity system.

In “Economics of identity systems” we also observed how users already interact with identity concepts in their day-to-day economic activities, and the artifacts they use as tools to accomplish them.

This article explores the different aspects of how a typical user understands concepts related to identity through the use of economic, cognitive, and design lenses, as well as through historical observation and application of first principles.

We then explore how multiple identities play a part of a user’s cognitive understanding of their place within multiple social contexts as well as task-based contexts with anonymous and pseudonymous identities.

Then we explore how identity-related tools and artifacts have historically been used and understood by people, including how they use artifacts that function as IDs, credentials, and/or keys, as well as how for managing large numbers of artifacts we use complementary organization and storage tools.

Building systems and applications that operate based on concepts parallel to a typical user’s mental models, will inherently result in better user experiences, as well as more intuitive understanding of underlying processes.

As explained in “What identity means” the word “identity” is overloaded on many levels. Few regular users understand abstract words like identity, authentication, credentials, or authorization. So here, let’s reiterate the key terms and concepts that will be reused throughout this article to discuss users’ consciously or subconsciously understanding. 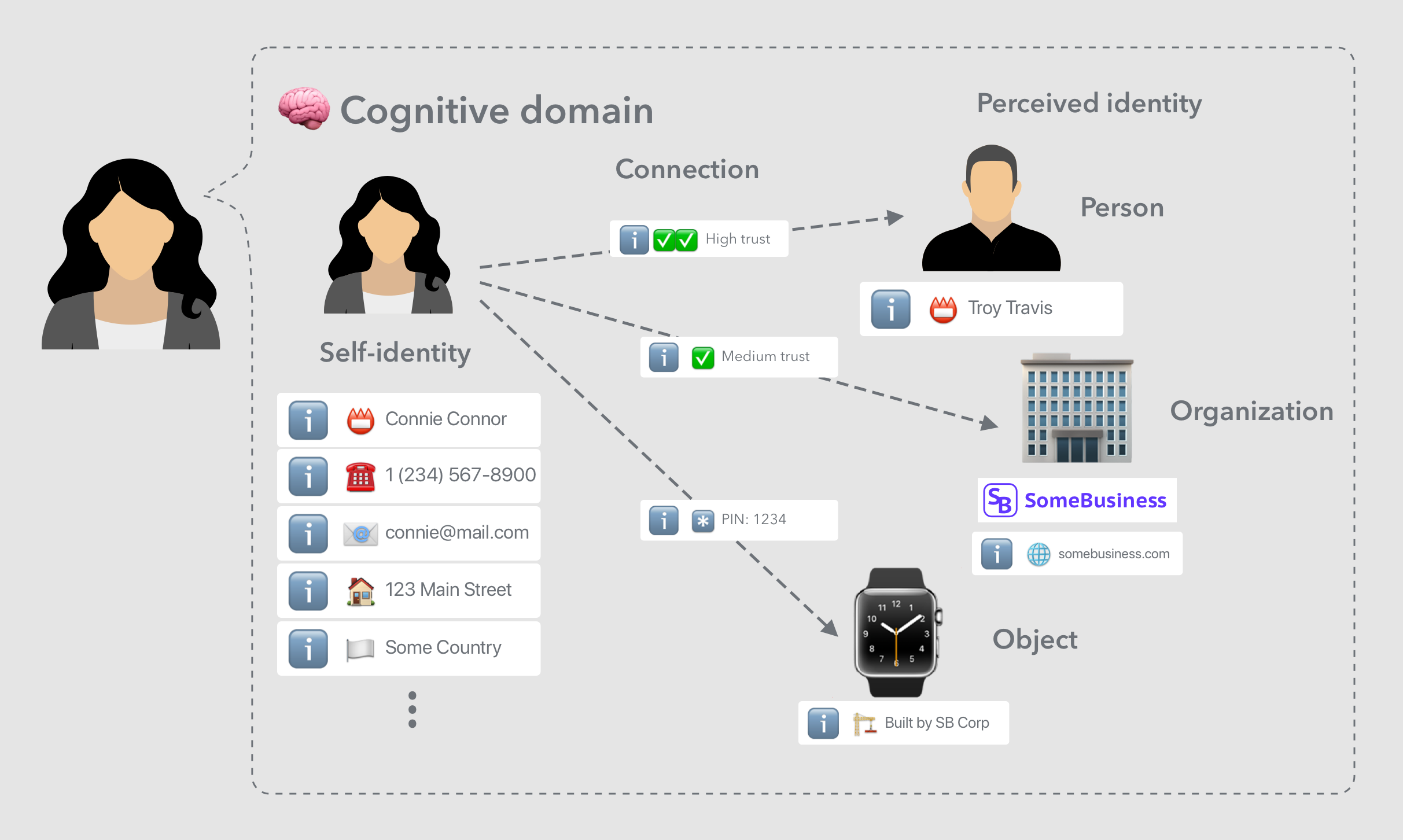 Our goals in designing intuitive identity systems for consumers, will often require us to align the concepts and taxonomy used to that of our natural mental models.

As subjects of life evolution, we are inherently economic individuals and societies. As such our mental models have evolved with significant influence from the economic activities that most help sustain us and our societies. With this view we can look at human mental model of specific types of activities, artifacts, tools and mental contexts that are closely related to our use of identity systems.

You can argue that our minds come equipped with a cognitive identity system, one that intuitively interoperates with the real world, and is sometimes aided by external identity systems such as digital or paper-based ones, ultimately forming a hybrid system.

In “Economics of identity systems” we touched on the frequent and high-value activities that help us support transactions. 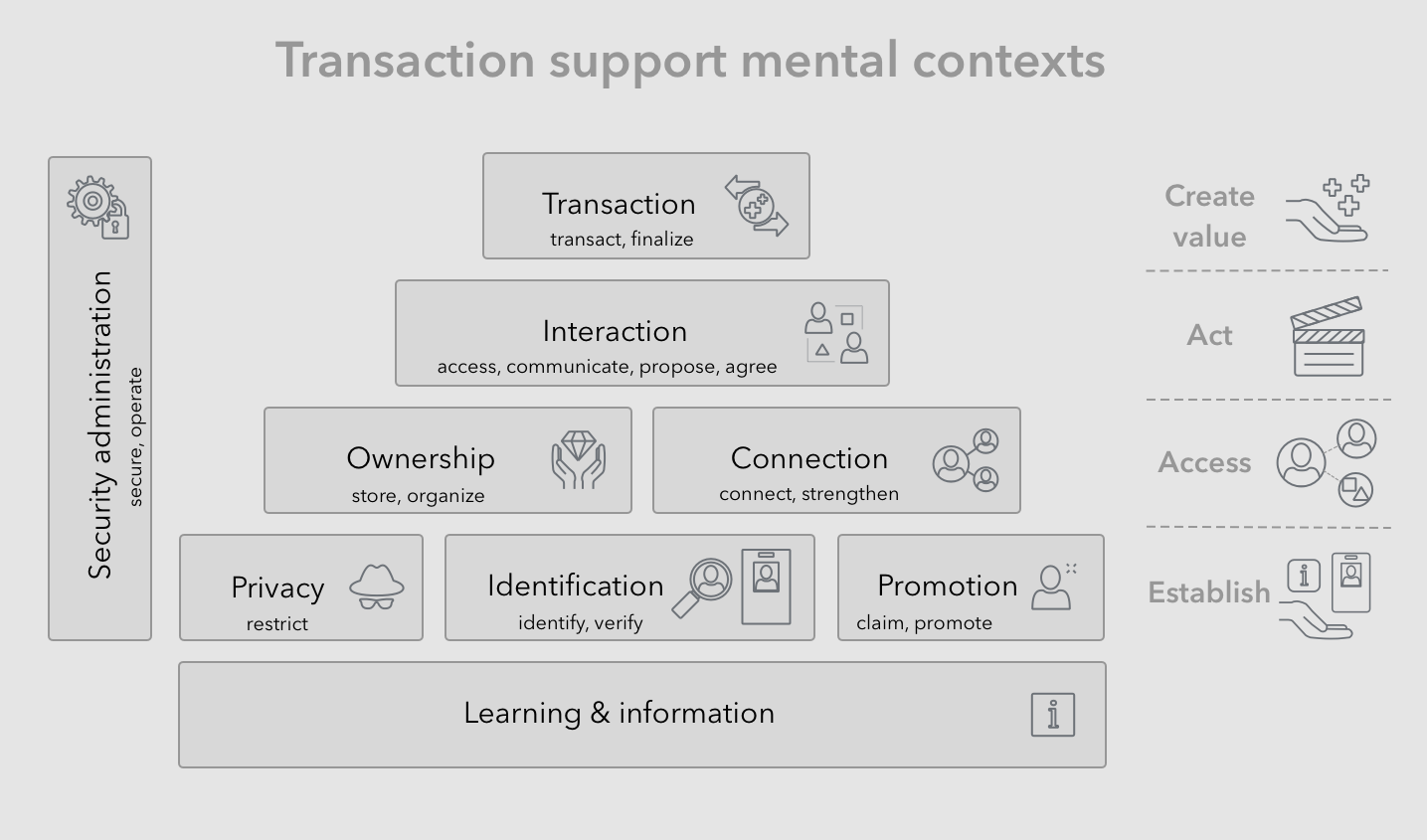 As a result of the users’ explicit understanding of these concepts, they are expected to be intuitive to deal with as digitally represented artifacts.

As mentioned in the previous sections, a person’s self-identity is not one static thing, it morphs depending on the context of the social circle or context it is embedded in. Each of these multiple identities take on a well-defined role within their target social context, and may be associated with separate identity information fragments. 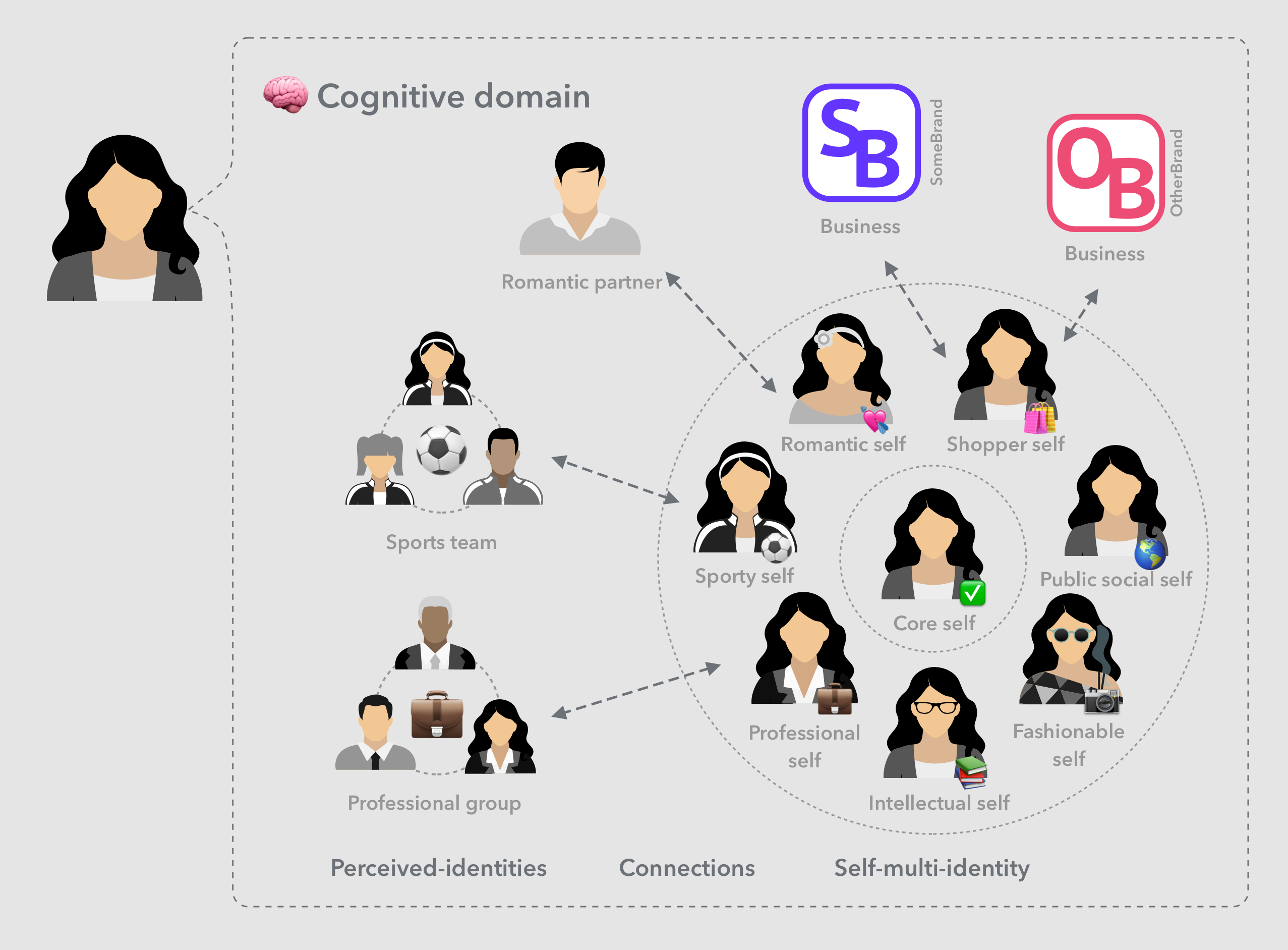 A list of some well known social contexts include but are not limited to:

There are certain task-based relationships where one’s self identity is not consequential. Often such tasks can be completed using a completely or partially anonymous identity, at other times they can be accomplished using a synonymous identity that is correlated across sessions yet unidentified and uncorrelated to other identities.

For example buying a pack of cigarettes from a convenience store using cash can be done mostly anonymously, however creating content and building reputation in social media can be done pseudonymously. Browsing the internet can be performed in incognito mode which is mostly anonymous but leaks information such as your IP address.

Identity as a tool

Often the way identity concept manifest themselves in the external physical or virtual worlds has to do with how we use “identity” as a tool for accomplishing everyday tasks.

In “The economics of identity systems” we take an in depth look at how we historically use identity-related artifacts and tools, and reveal the insight that despite going various waves of technologies, we have been using them to accomplish the same set of activity verbs.

Artifacts we tend to use by the name ID, identification card, or identity, across different technology waves have historically performed a combination of one, some or all of the following functions: 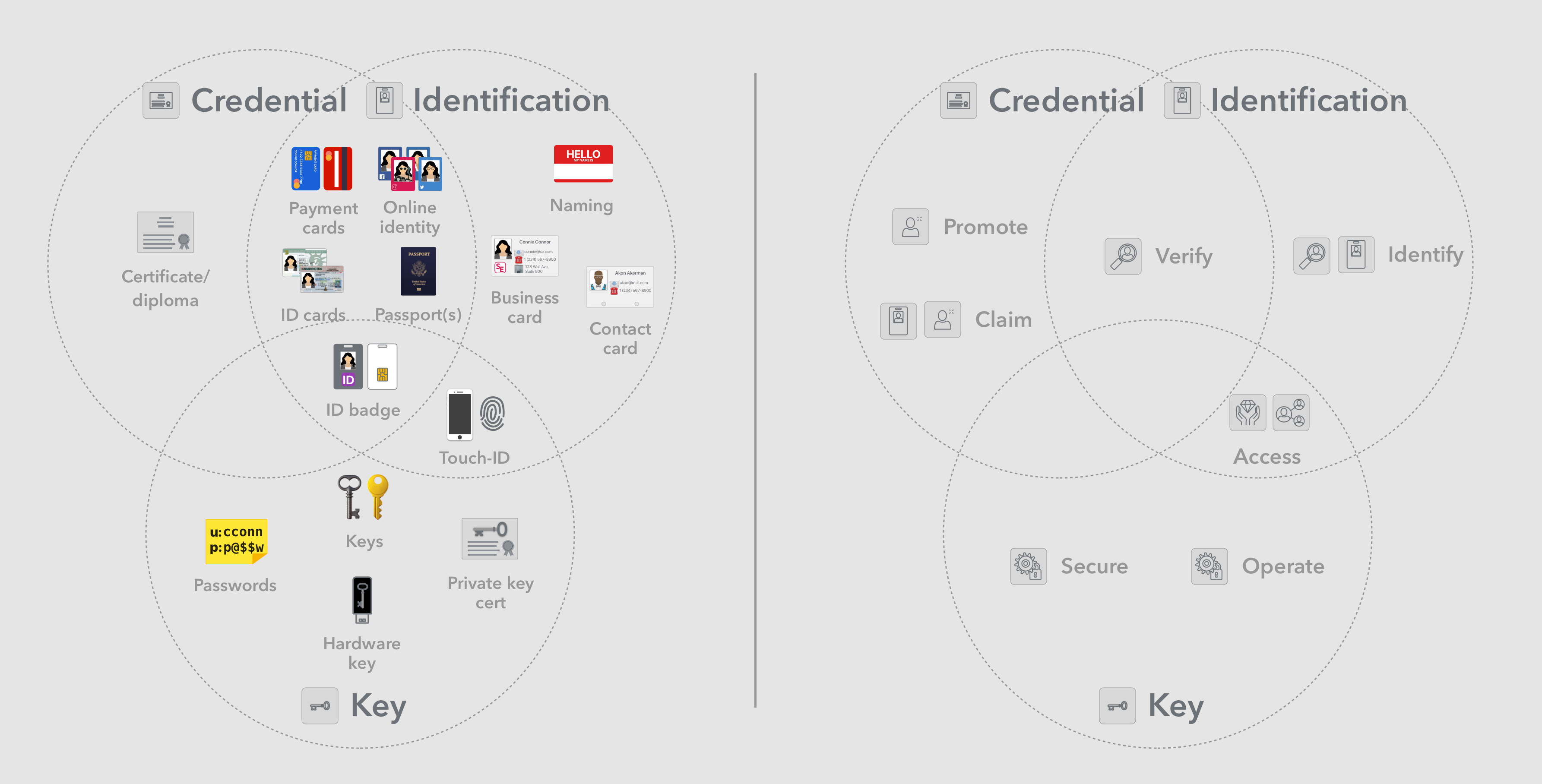 When dealing with a large number of these artifacts and tools, we often resort to using additional organization and access of tools. These tools in turn seem to naturally function in parallel to how we mentally organize and access the related concepts.

For example for physical tools like hammers and wrenches, we use complementary tools such as tool-belts and toolboxes to either temporarily store and immediately access them, or store them for longer term storage and access.

For artifacts such as ID (identification document) cards, keys, payment cards, or contact cards we utilize similar storage and organization tools such as wallets, keychains, and rolodexes. 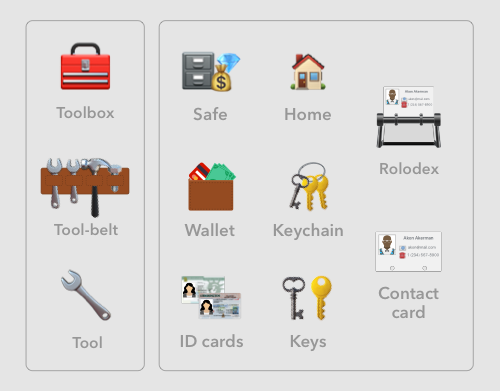 Our ultimate goal of understanding the mental models of typical users is building intuitive identity systems and applications. They need to operate based on parallel concepts to said mental models in order to achieve better user experiences and intuitive processes.

This article takes a good stab at identifying concepts that are likely to be innate to human cognitive constructs, and how multiple identities innately make up people’s understanding of themselves. It also touches on the common patterns of artifact and tool usage, as well as complementary storage and organization tools.