Every time I tell someone about identity, my field of work, they glare back with a perplexed expression. Why does the word “identity” confuse people so much? Surely this has something to do with it being one of the most overloaded terms in the history of technology, business, and humanities. It has become a designated buzz-word that confuses and impresses audiences, enough to make them more susceptible to sales tactics. What if it was possible to break down and demystify the word?

And so, I set out to find a clear definition that would help me explain identity to others.

The simplest everyday definition of identity has to do with how we identify ourselves, and others. As such, identity is the information we mentally associate with ourselves, other people, entities, and objects.

The word “identity” however, is overloaded across various domains, which makes its meaning muddled and confusing. Across humanities it is used synonymously with related concepts such as self-identity in psychology, collective identity in sociology, and shared identity in political science. In business the word is sometimes used in place of brand identity.

In industry, the identity space describes all market activities that have to do with identity systems. The space definition is open ended and requires further clarification along the high level segments (consumer, enterprise, government) and sub-segments (consumer login, social media profiles, identity verification, access management, etc). Occasionally you hear the word in place of the macro and long-term identity digitization trend.

In more technical circles, identity either refers to identity systems, or to specific instances of digital identity, representing real world people and entities. The notion of digital identity in turn is closely related to security concepts such as digital privacy, trust, verification, etc.

When it comes to communicating the “i” word, providing context is always crucial.

Identity is the information we associate with ourselves, other people, and things.

We each have our own set of identities (self-identities) that we share with the world, depending on the context. For example we present one identity to our friends and family, and another to our professional colleagues.

We also perceive and identify other people and organizations, based on the identities (self-identities) they have put forward, but also with our own additions and subtractions, including judgments around reputation, intentions, and trust level. This is called perceived identity. For example, you may have high trust in a family member despite their own low opinion of themselves, or you may now have a lower trust for Equifax after the recent security breaches.

We maintain long term connections, at various levels of engagement and trust, with those people and organizations we deem worthy of future interaction. For example, you may have decided to expand your relationship with a new friend you like spending time with, and you may have decided to cancel your internet service from that cable company with subpar service.

We identify objects and things, somewhat similarly to above, but with possible ownership considerations, and without subjective judgments around direct intention and trust. For example, you may identify your new smartphone, by its manufacturer, and by your ownership of it.

A word with many meanings

At the root of it all, the cognitive process of identification assigns specific properties, characteristics, and intentions to things and beings we know or connect with. Cognitive identities are therefore the most basic cognitive constructs associated with all things that are distinctly recognized. This meaning is what the simple definition in previous section most relies upon. 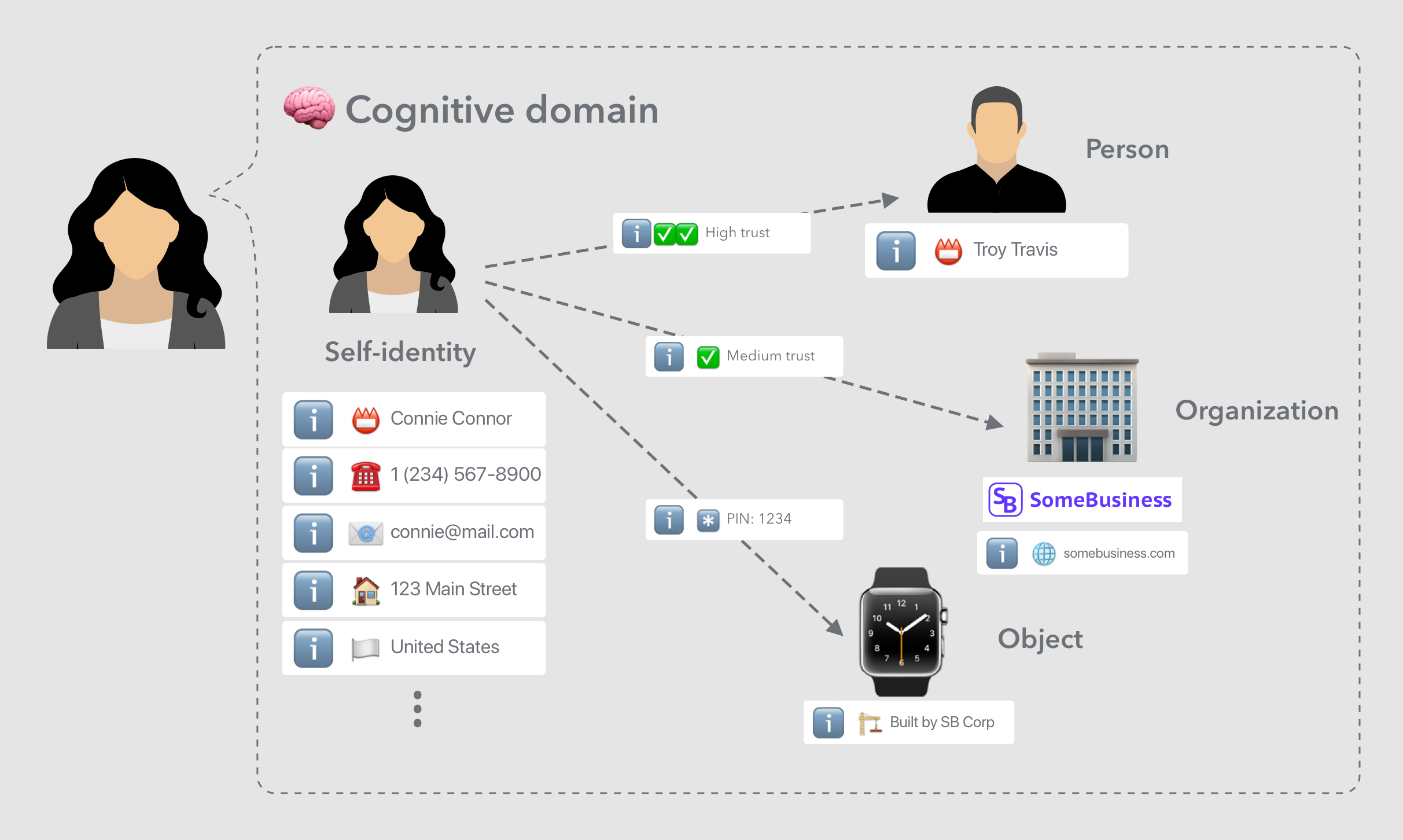 The one and most important instance of cognitive identity is that of the self, also known as self-identity, which is also used synonymously as such by psychologists. This is the concept referred to in the sentence: “She felt her identity transform after having her first child”.

Political scientists use identity, or shared identity, in aggregate form and in the context of social collective consciousness. For example shared identity is used here: “The African-American community’s identity is partly defined by their common experience of discrimination”. Shared identity has a prominent role in the understanding and wielding of identity politics.

In business marketing, brand identity refers to the traits and characteristics that a business aspires to promote itself as. For example: “Apple’s identity is synonymous with desirable devices, magical innovation, simple experiences, and trusted curation of technology”. In a sense, brand identity is a form of perceived identity.

All of these different definitions have permeated throughout our culture, and have been confusing the everyday person’s understanding of its meaning. It is thus important to be explicit about the context when discussing identity.

The identity space (industry) describe all market activities that depend on the building, maintaining and operating identity systems. The use of the term identity space is also imprecise and can be clarified further. The space primarily consists of the following high level segments, defined by the customer type that the market serves:

The consumer identity market segment, consist of multiple sub-segments including the following:

In the (business and) enterprise high level segment, some most prominent market sub-segments are:

One of the factors sustaining the digital identity space is the long-term macro trend towards digitization of identity. As such, one may sometimes hear the words digital identity in place of the identity digitization trend, which has been taking place for the past few decades. The self-sovereign identity movement on the other hand, is the latest manifestation of this long term trend, but still in its infancy.

Identity systems operate by defining, maintaining and using virtual representation of real world identities, such as in the case of social security system with the SSN. A more specialized form of virtual identities are digital identities, such as social media profile, or login accounts. These are arrived at by translating the cognitive representations of specific identities into the virtual or digital domains, in the form of a social security account, or a Facebook account and user profile.

We represent our thoughts in words through using language, in order to communicate more effectively with others. Similarly, we use virtual identity artifacts, to help us communicate the concepts of identity and trust. As human societies, we have created and used identity systems, to make economic transactions more efficient, though easing the verification of digital identity and reputation of transaction participants.

Initially this was done at the scale of friends, family, and tribe, using informal identity and reputation systems. In the past century or so we have been able to scale this even further to the level of nation states, by using large scale identity systems, with an early example being the United States Social Security system. Furthermore, in the recent decades, we have improved the scale and efficiency of such systems with the use of digital technology, digital identity systems and digital identities. 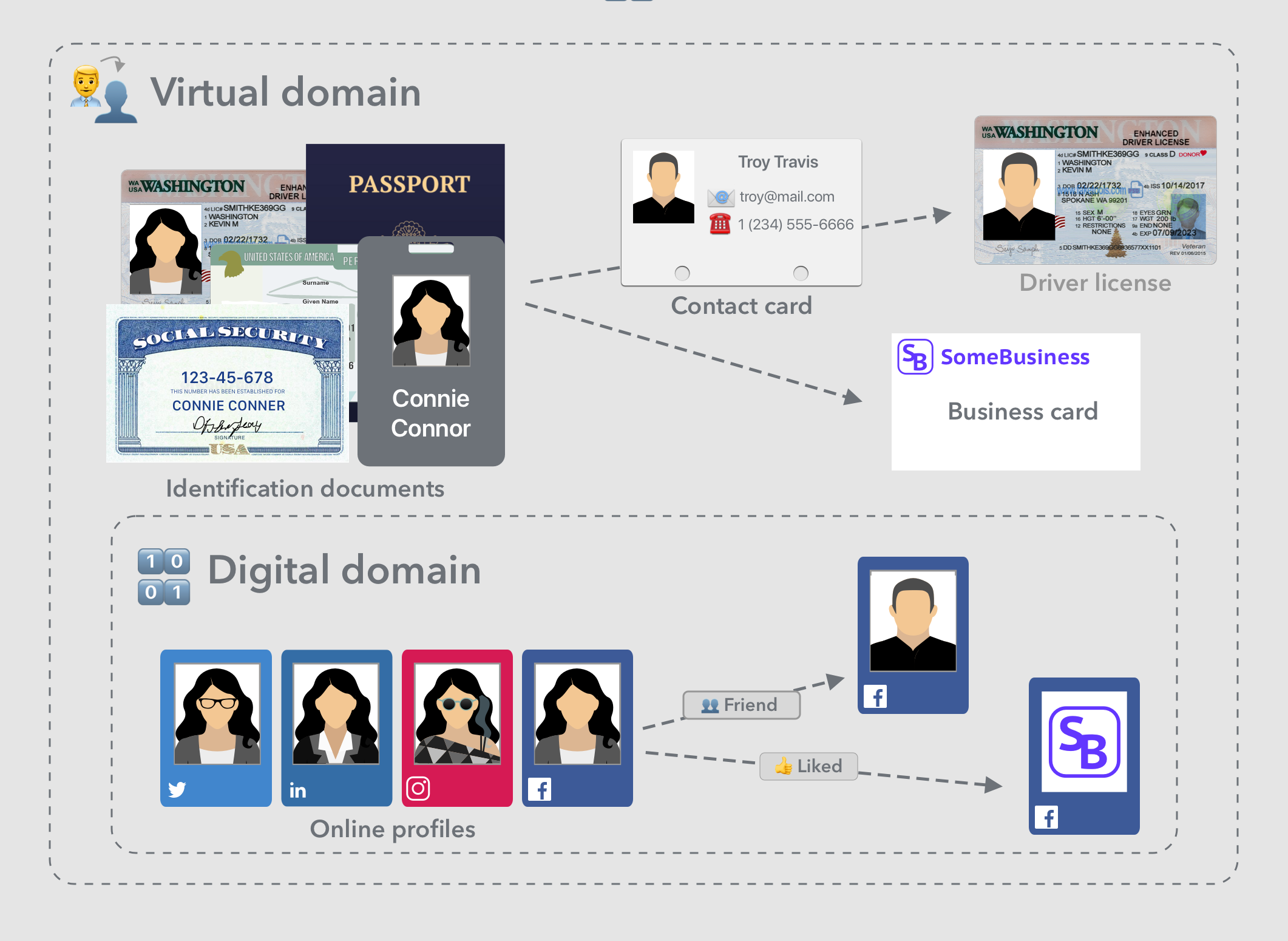 In this section, I attempt to clarify use of the word in the context of my own daily life. Context is important, as mentioned above, and in my field of work, identity is used to mean 4 distinct but related things in different contexts.

“I work in [the new] [consumer] [self-sovereign] identity [space].”

“I am part of [the self-sovereign] digital identity [movement]”